Well, nothing too exciting to report out on from this past weekend.  Last week I caught a nasty case of bronchitis and ended up in urgent care because I refused to slow down with work.  I had a huge wedding this weekend to service and I convinced myself I was well enough to come in (despite the fact that I ran an average temp of 102.5 for about 5 days straight).   So I spent most of my time either at work, or recovering on the couch while I existed on almost nothing but cough syrup, antibiotics, Tylenol, Ibuprofen and water.  Charlee was excellent company of course :) 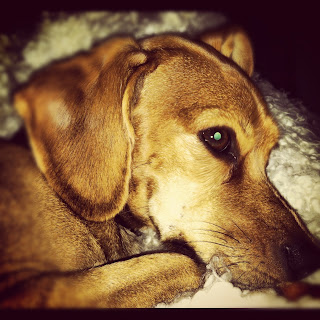 And in other news...I am excited to announce that I have officially accepted a new position within my company in Tampa!  While I have been so blessed in my current role with our Sales organization, my passion lies in servicing events (primarily weddings!) and so I will be making my way back into the Event world in less than two weeks!!  Orlando has been a wonderful home to me the past year and a half and I am definitely sad to leave all of the amazing friends I have made at my current hotel.  My last day here is next Wednesday, and then I will actually be heading home for my sister's baby shower (yay!), and when I return....off to Tampa I go!  :)
Posted by Rebecca at 11:14 AM No comments:

And I've created another pinterest recipe, the "Mini Apple Pie" found here on Little Bit Funky's blog.  I've only made apple pie (or any pie!) one other time in my college cooking class...so I definitely consider myself a pie amateur, and I found this recipe SO easy to make!   I made no variations from the original recipe, except that I halved it.  Let's face it...having 24 mini pies in the house can get dangerous!!  So here's how the mini apple pies go down:

For 12 Servings
Cut up 4 cups of apples into 1/2 inch bites (I found that approximately 1 apple equaled a cup)
In a large bowl mix the apples with:
6 tablespoons of flour
3/4c of sugar
2 heaping teaspoons of cinnamon
1/4 teaspoon of nutmeg

You will also need:
2 tablespoons of chilled butter cut into 12 equal portions, and 1 tablespoon melted (reserve for the end!)
1 box of refrigerated Pillsbury Pie Crust

Unroll your first pie crust and cut several circles out.   Continue this until you have enough crusts.  (Just like the Canastitas, I used a large coffee mug for my circles).

Line each cup of your muffin tin with a tiny pie crust.

Then fill the crusts with your apple mixture and push the crusts down the rest of the way.  Use all of the apple mixture; each pie should have a little mound.  Then take each of your little pads of butter and top each mound with the butter.

Using the remaining scraps of pie crust to top off the apple mound and brush with the melted butter.  Bake for 20-22 minutes at 400. 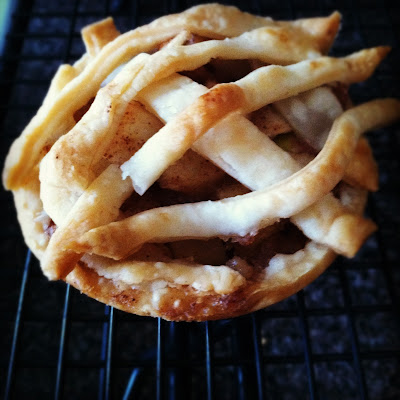 Posted by Rebecca at 9:53 AM No comments:

This past weekend was spent almost entirely indoors (and in the kitchen!) as the weather was just downright awful.  Lots of thunderstorms and high winds.  Bracing ourselves for another weekend of bad weather as Isaac is brewing down near the islands.  Yikes!

Saturday morning I spent a few hours (and several dollars!) at the auto shop...I sure hope my car felt the love afterwards.  I barely managed to get home from the grocery store before the storms started, so I spent the rest of the afternoon and evening in the kitchen as we decided to have a date night at home.  Here's what I made:

First, the canastitas made another appearance (seriously, LOVE them!).  I'm so happy I stumbled upon the recipe for it.  :-)


Next I grilled up some peppers and FINALLY used my indoor grill pan for the first time (sorry mom!  I asked for this as a gift years ago and had yet to use it...but I love it! THANK YOU!).  Here's a tip: NEVER grill peppers indoors. Ever.  The smoke that's produced from them was out of control.  Fans on, air off, windows open and I could still hardly see my hand in front of my face!  Lesson learned.  Luckily, they were delicious and almost worth choking on smoke to death to eat.  Almost.

Lastily I grilled up some steaks.  Now, those who know me well know that I do. not. like. steak.  I decided to give it a try again for Jordan's sake and I knew he was craving it!  Not too long ago we stumbled upon chimichurri sauce for the first time.  Well, my first time and he had eaten it before in Argentina but not realized what it was.  Since then, we've been dying to try recipes with it.  A coworker of mine has a connection to an Argentinian restaurant and brought me in a jar of their chimichurri sauce (thank you Sol!).  So in went the sauce to marinate the steaks. 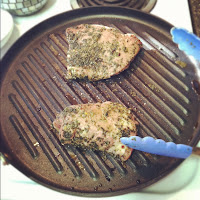 Jordan said they were delicious (I beg to differ...but again, I don't like steak).  The chimichurri sauce was SO good though. Yum! He ate all of his and most of mine.  I went back for seconds on the canastitas.  :-) 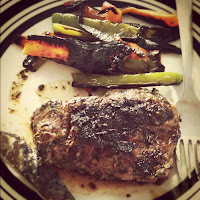 To cap off date night, we rented The Hunger Games and enjoyed some mini apple pies I made earlier in the  afternoon (recipe to follow!).

And of course...we can't go without a new photo of Charlee.
Hope you're all enjoying your week!
Posted by Rebecca at 10:29 AM 2 comments:

This post is loooong overdue!  This past March I had an amazing opportunity to attend a training class in Monterey, California.  If you haven't been there...you must add it to your list of must-visit places.  The weather, the food, the people, the shopping, the view....all of it is insane.  I would move there in a heartbeat! I was there for an entire week of training, but I was fortunate to have two full days of free time.  My Aunt and cousins from Stockton, CA were kind enough to pick me up from the airport and spent one of my free days with me.  As they are members of the Monterey Bay Aquarium, we spent a lot of our day there (such an amazing place!).  We also poked around on one of the piers, did the 17 mile drive in Pebble Beach (more to come on that!) and I finally got to eat at a Bubba Gumps :-)

On my OTHER free day, I booked a whale watching tour (I highly recommend Chris's Whale Watching).  Now this is were it gets crazy cool.  While I did see a great whale (breathtaking!), we also ran into hundreds (no exaggeration here), HUNDREDS of dolphins. The ship captain estimated around 300-400 dolphins and stated that for every 1 dolphin you see above water they anticipate at least three below the water. With it still being March, and with the winds on the ocean...it was FREEZING on the boat.  (Side note: I am officially transitioned to Florida weather...I'm cold all the time outside of this state).  Because I was so cold...my iphone was having trouble recognizing my finger as it was pressing the buttons to take pictures....that's right...NO pictures of the great whale.  BUT, I was able to capture a few videos of the dolphins.   Happy viewing!

This video was shot as we were first approaching the dolphins...it looked like a random wave out in the distance...and as we got closer to the dolphins...the passenger next to me exclaimed (in a very British accent) "not a wave...look, it's dolphins - they're playing about in the water!"

And we've finally come to the end of another work week - HOORAY! :-)  Finishing off this week with some of my favorite things I am loving right now...

I just finished reading "I've Got Your Number" by Sophie Kinsella.  It was a cute chic-lit book...definitely light summer reading.

Obsessed with my new lotion from Bath and Body Works, Paris in Bloom!
My new bracelet from Banana Republic (it's on sale now...go get yours!) I love wearing this bracelet with almost every outfit and get compliments on it every time I wear it. Love!
I don't have this item in my hand just yet...but I should be receiving it in 5-8 shipping days!! Love me some Kate Spade and I am obsessed with their phone covers, highly recommend them.
And lastly, I am mid-attempt to give up my insane addiction to Diet Coke and I've been guzzling water like crazy!  I refill this little guy all day long!
Have a great weekend everyone!!

Posted by Rebecca at 3:37 PM No comments: